I wanna be a supermodel

I want to start wearing dresses. A lot. 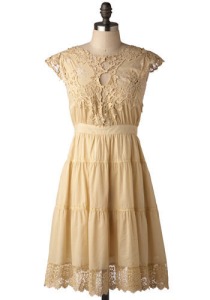 I want to wear them at completely inappropriate times, like out at a UConn party on a Friday night.

I want to look like Zooey Deschanel at all times.

Slight problem — I live in jeans and t-shirts (and sometimes flannel).

Sure, I wear dresses, but usually sun dresses, and usually on special occasions or at least out to a restaurant.

Is it weird that I just want to look like a 1950s housewife?

After all, Julie & Julia (go see it, it was fabulous) has inspired me to cook extravagant meals in my apartment all year (school can wait, food is more important).

I know it won’t come to fruition, but maybe with a pretty dress and a nice apron, I’ll pull off lobster thermidor?

Posted in Fashion Shmashion, Me Me Me, Peace and Love

Sarah Palin in one of her stylish outfits

John McCain really should have thought twice before dissing Obama for having celebrity qualities a while back. Turns out in addition to his pricey makeup artist, the Republican National Committee is shelling out a good chunk of dough to keep our favorite Vice Presidential fashionista (and her family) looking so good.
According to an article on politico.com, the RNC has spent $150,000 on clothes for Palin and her family since she signed onto the ticket. The article cites from the campaign’s financial disclosure records that almost $50,000 was spent at Saks Fifth Avenue in September, and a few shopping sprees to Neiman Marcus included one where $75,000 was spent, right after Palin was announced as McCain’s running-mate.

When Politico tried to get comment from the campaign, spokeswoman Tracey Schmitt answered, “With all of the important issues facing the country right now, it’s remarkable that we’re spending time talking about pantsuits and blouses. It was always the intent that the clothing go to a charitable purpose after the campaign.”

Palin in one of her signature red suits

This isn’t the first time a candidate has gotten flak for spending inordinate amounts on personal luxuries, but Palin seems to be the most expensive (and fashionable!) yet. According to the article, the Obama campaign does not have similar spending in their records.

The records indicate that hundreds of dollars were spent on high-end clothing and equipment to cart Palin’s youngest along on the campaign trail, and nearly $5,000 was spent at an upscale men’s store, presumable for “first dude” Todd Palin.

Guess her “straitjacket style” comes at a price, and not one that the Governor of Alaska can afford.